Abdominoplasty is the removal of excess skin and fat from the abdomen (belly) and, if necessary, also involves tightening of the abdominal muscles. Contrary to the rather trivial-sounding ‘tummy tuck’, it involves significant surgery and should not be undertaken lightly. It generally leaves a scar from hip bone to hip bone and a scar around the umbilicus, but this scarring can be more extensive in severe cases.

Who is a good candidate for abdominoplasty?

The best results from abdominoplasty tend to be achieved in otherwise healthy patients who have more excess skin than excess fat. The classic example would be a post-pregnancy tummy. In these cases, the outcome is further improved by the tightening of the tummy muscles which are often separated following pregnancy. Another instance where results are predictably favourable is in exercise-induced weight loss where the fat has been burned off and the excess skin remains stubborn.

Weight loss through diet or weight-loss surgery may appear to be suitable, but these patients tend to have poorer nutrition which can affect healing and infection resistance leading to a higher rate of complications. Therefore, it is essential that such patients optimise their nutrition before embarking on corrective surgery.

How is it done?

For patients after a massive weight loss, there are 2 main categories of abdominoplasty:

The Fleur-de-Lis abdominoplasty is reserved for severe cases of excess skin and fat as one might see in extreme weight loss cases. In this instance, the surgery is the same as for a regular abdominoplasty, but with an additional vertical component of excision above the umbilicus to excise the excess tissue. It is called the Fleur-de-Lis as the pattern of excision resembles the stylised lily flower found in heraldry.

During our initial consultation, I will evaluate your overall health and make a surgical plan based on skin type, excess tissue and expectations.

What are the risks?

Abdominoplasty is not straightforward surgery. It should be performed by a qualified plastic surgeon. As with all surgery, there are certain risks associated with it. All surgery involves a degree of bleeding. In the vast majority of cases, this is minimal and easily controlled during the procedure itself. In a small percentage of patients, there may be a more significant collection of blood that may even require a return to the operating theatre to remove it.

All surgery involves the formation of scars. The incision scars will be raised and pink for the first few months, but will usually settle into fine white lines after several months. In some cases the scars can remain raised and pink.

The skin of the lower abdomen will become somewhat numb after the surgery and, although this sensation returns to normal after a few months, in a few cases this can be permanent. 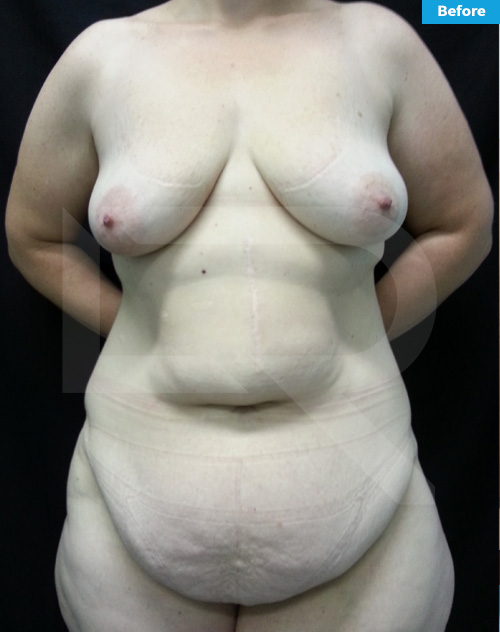 To view more Before & After

How long does the procedure take?

Every situation is unique, but generally Abdominoplasty surgery is about 2-4 hours long
depending on individual circumstances and how extensive the procedure is.

Will it be performed under local or general anesthesia?

How long will I be out of work?

Patients may return to work in 2 -4 weeks depending on job duties and on the procedure performed.

What should I expect after my procedure?

Do I need special testing prior to my procedure?

Testing is dependent on the patient’s health history and age. Testing is ordered for every patient.

Will this be covered by insurance?

When can I start exercising after my procedure?

Light, normal activity can be resumed within 3 weeks following surgery.

How much does surgery cost?

Every situation is unique and the cost of surgery depends on several factors. The duration of the
procedure varies on how extensive the surgery is. The duration will then determine the price of
anesthesia and how long the surgical facility will be scheduled for. In order to provide the most accurate
surgical fee estimate, it is necessary to meet with Dr. Redondo for a consultation.

Get A Free Consultation!